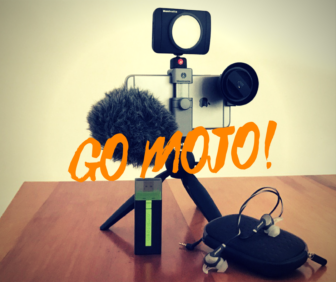 Our expert is Ivo Burum, an Australian-based journalist and award-winning television, writer, director, executive producer with more than 30 years of experience. Burum has been a regular speaker at GIJN conferences and runs a website, SmartMojo.

At the IJAsia18 conference, Burum presented MOJO Unpacked – the 20 Most Asked Questions.

Mojo Workin’: Developing And Producing on a Smart Phone (Part 1) This column includes tips on developing your story idea and sharpening your focus on story structure, character and shots coverage (также на русском).

At GIJC17, he presented Guerilla Mojo.

GIJN has published a series of his tipsheets, collected here, starting with his “Essential Tools” piece:

Also, for a nice overview, take a look to Ivo’s tipsheet from his workshop at IJAsia 16.

The Mobile Journalism Manual was produced by a team led by the Konrad-Adenauer-Foundation’s Media Programme Asia. Chapters cover apps and equipment, “going live,” and more.

In addition, see a lengthy list of tools showcased by Mike Reilley and Victor Hernandez at EIJ17.

Check out the tipsheet by Seamus Reynolds from the African Investigative Journalism Conference 2016. It includes many suggestions, a discussion of video journalism, other resources and people to follow on Twitter.

Also see 5 iOS apps for creative mobile storytelling, by Marc Settle, smartphone trainer at BBC Academy, who listed some of his go-to apps, as well as some of his new finds in a March 2018 post for Journalism.co.uk. Read a companion interview with Settle. In September of 2018, Settle was interviewed by BBC Academy about iOS 12, particularly the new features which will be of most use to journalists.

Offerings at IJNet include 3 mobile video editing apps to try in 2018 and How to experiment in a new medium: The rookie mobile journalist.

“Seven Lessons Learned in a Year Teaching Mobile Journalism,” was written by Corinne Podger after teaching the subject at Australia’s Macleay College.

How to produce a 360 story with your mobile phone, was written by Marcus Bösch, co-founder of VR/AR Studio Vragments.